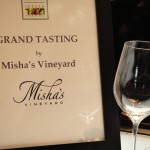 It is the second year that Misha’s Vineyard has been part of the Hong Kong International Wine & Spirit Fair with our wonderful distributor Jebsen Fine Wine. This was the fourth time this show has been held and in that time it has become Asia’s biggest wine show and held in a city which is now the focal point of wine business in the Asia Pacific region and a the largest wine auction centre in the world! More than 19,000 buyers from around the world attended the Fair and although that attendance was up 40% over the previous year, it actually felt like there were slightly fewer people than last year but that could also have been because that attendance was spread across a staggering 930 exhibitors from 37 countries! In addition to the trade buyers, nearly 20,000 public visitors took the fair’s final day up nearly 40% over last year’s attendance at the public day.

Taking pride of place just inside the main entrance to the Fair was the Jebsen Fine Wine stand – a location that was unbeatable! And with Jebsen’s portfolio of wine clients, it was a stand that attracted much attention and many photographs! There were 10 of Jebsen’s brands represented on this year’s stand including Champagne Bollinger, Taylor’s Port, Baron Philippe de Rothschild, Robert Mondavi, Luce (by Frescobaldi), Chateau d’Esclans and Grey Goose Vodka! With a line-up of amazing brands like that, it was indeed an honour to be part of the Jebsen family.

There was also a special reason to celebrate at this year’s Fair as it was also the 20th anniversary of Jebsen Fine Wines and on the opening day of the Fair, Mr Hans Michael Jebsen, chairman of Jebsen & Co, was at the stand to toast the anniversary with staff and the winery principals. In fact a small glass of Bollinger was how the following two days started as well! It was a little treat that helped in facing the 9 hours of standing on the booth each day!

It was an exhausting event but wonderful to have been there and very important in our strategy to build a strong brand in the region! Thanks to all of our trade friends and media who came to say hello whilst we were there. See you next year?