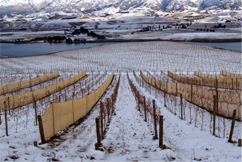 Most descriptions of Central Otago would leave you wondering why on earth people would plant grapes here. It’s the world’s most southerly (at latitude 45° south) and New Zealand’s highest winegrowing region – and prompts titles for books like Vineyards on the Edge (D. Cull, 2001). This is a place of extraordinary contrasts with craggy bare mountains, massive schist rock tors, and gorges carved by raging rivers but also spectacular glassy lakes, rolling green farmlands and deep valleys of orchards producing some of New Zealand’s best stone fruit. Although the conditions are known to be marginal for growing grapes with frost a big risk as well as a short growing season, it has become New Zealand’s fastest growing region with leading international wine critics raving about its wines.

With 133 wineries (as of June 2016), Central Otago is home to 20% of New Zealand’s wineries, yet it only represents just over 5% the nation’s planted hectares – which means average vineyard size is small at just over 8 hectares. And it harvests just over 2% of the country’s total grape harvest – which means yields are managed to very low levels. Nearly 80% of the grapes grown in the Central Otago region are Pinot Noir, followed by Pinot Gris (11%) and Chardonnay and Riesling which are both just under 4%. All of this is in contrast to the country’s largest wine growing region of Marlborough which contains 66% of New Zealand’s vineyard area and produces 72% of the country’s grapes with 78% of their vineyards planted in Sauvignon Blanc. 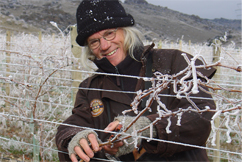 So the volume of wine from Central Otago is tiny however it’s Central Otago’s Pinot Noir and Pinot Gris that command the country’s highest price per tonne of grapes. So what’s so special about this region? A well-chosen site, especially on the warmer northern and north-western slopes, with yields managed to very low-levels, will generally produce excellent fruit – and make world-class wines. The blend of icy cold winters, hot summers with little to no rainfall, and large diurnal temperature swings during the ripening season, allow grapes to ripen with wonderful flavour intensity yet retain high levels of crisp acidity enabling excellent ageing potential.

The grape-growing areas of Central Otago experience a semi-continental climate unlike the rest of New Zealand which has a maritime climate. The landscape of Central Otago is also quite different with soils generally low to medium fertility ranging from heavy clays to free draining silts to stony schist-dominant and glacial soils.

It is this blend of this climate, the soils, and the location of each vineyard that come together in a specific way to create a unique flavour profile – a term the French call ‘terroir’. With Pinot Noir, known to be a very ‘transparent grape’ – meaning it is affected by every aspect of its growing environment, this element of “terroir” is extremely important. It’s one of the reasons that the world has so many Pinot Noir enthusiasts – as every Pinot Noir is different and speaks clearly of its origins. For many winegrowers and winemakers, producing Pinot Noir represents the ultimate challenge and no other variety seems to awaken the same passions as Pinot Noir.
(Statistics from NZ Winegrowers Annual Report 2016 & NZ Winegrowers Vineyard Register Report 2016-2019)

New Zealand’s Place in the World

New Zealand is one of the leading new world wine producing countries and exports premium quality wines to countries all over the world. In 2016 global wine production was 259 million hectolitres (mhl) – a fall of 5% from 2015 and in fact the lowest in 20 years.
Of that, Australia produced just over 12.5 mhl (4.82% of global production) and is the 5th biggest producer with New Zealand producing 3.1 mhl (1.2% of global production) and ranked as the 14th biggest producer. Interestingly, the percentage change from 2015 to 2016 was a positive 34% for New Zealand – at a time when most European countries had declining production but also indicating the bumper harvest for New Zealand. 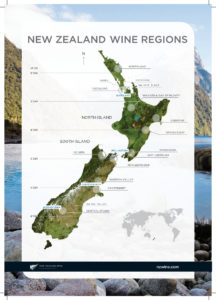 In the year to 30 June 2016, the value of New Zealand exports lifted 10% to just under NZ$1.6 billion, the 21st consecutive year export value has grown. Wine is now New Zealand’s fifth largest export good by value. Two decades of strong performance testifies to the underlying market and consumer demand for New Zealand wines and the industry target is to reach exports of NZ $2 billion by 2020.
The focus of New Zealand wine exports is Sauvignon Blanc which represents 86% of the total. This variety was commercially produced for the first time in 1979. It was the varietal that awoke the world to New Zealand wine and set an international benchmark for the style and that still continues.
Pinot Noir is the country’s second-largest export variety and has seen impressive growth in export sales in the last five years. Currently it represents 15% of planted area, 9% of wine production and 6% of exports having only started to be produced in the 1990s and predominantly in the cooler southerly regions. The largest percentage of Pinot Noir plantings are in Marlborough with 2,590ha but it represents only 10% of planted area. The second highest area of plantings is in Central Otago, with 1500 ha but where it represents 78% of planted area and is the domain for premium Pinot Noir.
The world-class Pinot Noir from the Central Otago region is expensive – vineyards are small and usually family-run, everything is done by hand, crops are managed to extremely low levels, and producers are all trying to produce the very best quality they can. It is very much the domain of artisans in search of the highest quality. The region represents only 0.018% of the world’s wine – so Central Otago Pinot Noir is a scarce commodity indeed.

In May 2017, Statistics New Zealand showed wine exports to the US surpassed NZ$500 million for the first time, and up 11% over the last year and now exceeding the value of Australian imports. (While the US imported more than twice the volume of Australian wine, New Zealand wine cost over two and a-half times the price of Australian wine on average at the border.) For New Zealand, by value, US exports are now worth 30% more than the next most valuable export market, the UK. New Zealand has become the third-largest supplier of wine to the United States, and there is more potential as consumer demand for New Zealand wine, especially Sauvignon Blanc, continues to grow.
New Zealand’s second biggest export market, the United Kingdom, recorded strong growth for the financial year ending June 2016, whereas exports to Australia, the third largest export market, were relatively flat. The US, UK and Australia represent 82% of New Zealand’s exported volumes although New Zealand wine is exported to more than 90 countries.
A snapshot of the New Zealand wine industry in 2016 showed 36,192 hectares of producing vineyard, of which 78% was planted in white wine. With 675 wineries registered in New Zealand (and 2040 vineyards), it’s still primarily the domain of small wineries and relatively small growers. In fact, 97% of wineries are considered to be small or medium-sized. The wine sector is again in a significant growth phase but it’s the multi-national beverage companies and the large domestic wineries that are planting grapes at a quicker rate than early on in the decade.
New Zealand may be one of the smallest producing countries with just over 1% of the global wine production, but in the UK, New Zealand achieves the highest prices for its wines. Over the past 10 years New Zealand has had the highest price per litre of all wine imports into the UK beating even France in this highly competitive market.
As a wine producing country, New Zealand punches well above its weight in so many areas. Its place in the world with respect to wine is probably best summarized by the marketing vision from New Zealand Winegrowers: “To be internationally recognized as the leading producer and marketer of highly distinctive premium quality wines.”
(Statistics from NZ Winegrowers Annual Report 2016 & NZ Winegrowers Vineyard Register Report 2016-2019, OIV 2016 report and USDA Gain Report for New Zealand Wine Sector for 2016)