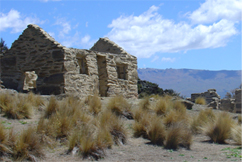 The first winemaker attracted to Central Otago was John Desiré Feraud who came to the area during the Dunstan gold rush of 1862, and after investing in a claim became rich overnight. Feraud, who was from a French winemaking family, recognised the potential for grape growing, and leased 40 hectares in Clyde where he planted the first wine grapes in 1864. Over the next 20 years he made a variety of wines even winning a prize for his Burgundy-style wine in Sydney in 1881. His farm, named Monte Christo Gardens, was an extensive garden of fruit trees, vegetables and 1200 vines, along with a winery which still stands today.

During this period, viticulturalist Romeo Bragato also visited Central Otago and declared the area as one of great potential for grape growing. However Feraud and Bragato’s enthusiasm for grape-growing did not spread to others and when Feraud left the region, commercial winemaking ceased. Over the next hundred years, no one tried to grow grapes again and the focus for Central Otago was on sheep farming and fruit production.

It wasn’t until the late 1970s/early 1980s that grapes were once again planted with the first commercial wines being produced again in 1987. So it’s been a little over 20 years since the riches of the land have been rediscovered.
References: Oram, Rick. Pinot Pioneers. Auckland: New Holland Publishers (NZ) Ltd, 2004
Cull, Dave. Vineyards on the Edge. Dunedin: Longacre Press, 2001
Courtney, Caroline. Wine in New Zealand.Auckland:Random House, 2003 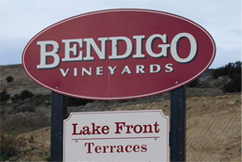 The sub-region of Bendigo

Bendigo, the region within Central Otago where Misha’s Vineyard is located, is also the name of one of the area’s most important sheep stations. Prior to Bendigo becoming known for grape growing, it was primarily known for producing some of New Zealand’s finest wool from the superfine Merino sheep that roam the Station’s stunning landscape.

Bendigo Station came into existence when Morven Hills Station – a vast tract of land from the Lindis Pass summit to Kawarau River in the south – was divided into smaller farms in 1910. The name came from the town of Bendigo in the Victorian goldfields in Australia, from where many of the miners came in their quest for gold. Bendigo was very much at the centre of the gold rush of the late 1860s as it was the site of New Zealand’s richest quartz reef gold strike. In fact the township of Bendigo was built virtually overnight from schist rock and earth to service the goldfields, and the old water races, sluicings, shafts, tunnels and tailings can still be found scattered throughout the Station. After the frenzy of activity, people and wealth, generated by the gold rush over a period of about 20 years, pastoral activities returned to the fore at Bendigo. 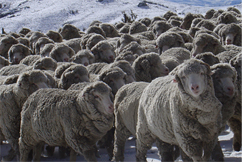 It wasn’t until 1998 that the first vineyard was planted on Bendigo Station – aptly named Quartz Reef – and since then many vineyards have been established there. The schist and limestone in the soils, combined with warm northerly and north-western slopes provide the ideal location for growing grapes. These vineyards have transformed the once rabbit-infested areas into one of the leading sub-regions for Pinot Noir. The fruit from Bendigo is highly sought after with many of the vineyards winning gold medals for the wines.