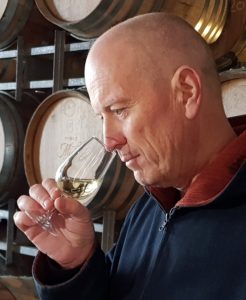 Internationally renowned winemaker Oliver Masters (Olly) joined Misha’s Vineyard in 2006. Forging some of New Zealand’s most consistently fine pinot noir over the past 20 years, Olly has carved a reputation as one of New Zealand’s leading winemakers and wine judges.

Olly’s credentials include an honours degree in Biotechnology from Massey University (1989) and a Post Graduate Diploma in Viticulture and Oenology (Distinction) from Lincoln University (1990). He serves as a senior wine judge at New Zealand’s major national competitions, including the New Zealand International Wine Show, Royal Easter Show Wine Awards, and six years with the Air New Zealand Wine Awards. He is also a regular wine panellist for Cuisine Magazine.

Starting his career in Martinborough in 1989, Olly has also worked in Hawkes Bay and Burgundy then joining Ata Rangi in 1994 as winemaker/viticulturalist then later becoming a partner. During his time there, Ata Rangi’s achievements included winning the Champion pinot noir at the prestigious International Wine and Spirit Competition in London on three occasions as well as numerous accolades and trophies in Australasia.