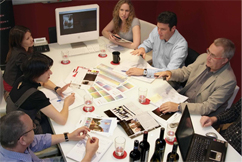 Developing a new brand is never easy – even for marketers! At the beginning of our vineyard’s development, (many years prior to the first bottle being produced), we had to come up with a name for very practical reasons – we needed a name for people to address their invoices to us, and the trucks needed to know where they were delivering the irrigation pipes, and posts and wires! We were adamant that we weren’t going to name the vineyard after a mountain, a river, a gully, a rock or a lake – that’s been done too many times before. And we didn’t want to have something that was quirky, contrived or just tried too hard. We just wanted something that was authentic and a reflection of us and what we were trying to create. It was Andy who suggested ‘Misha’s Vineyard’ – Misha being the nickname he has always had for me (my real name being Michele), but I wasn’t so keen at first. Finally I agreed when I couldn’t think of anything else, but it was a placeholder only – the real work on the branding was to follow much further down the track.

Then eighteen months before we were to produce our first label for our test crop of 2007 Pinot Noir, I put together a brand feedback team. This was a group of 25 people from around the world that we recruited to provide feedback and advice on our branding. The group consisted of wine wholesalers and retailers, wine journalists, wine collectors, a couple of marketing and PR gurus, and a couple of advertising and design experts. The group was a mixture of males and females and they came from New Zealand, Australia, Singapore, Japan, the UK, and the US. Most of the panel were people we knew only a little, perhaps met at a wine event once or twice, and a few we knew well. But they were all keen to embark on a journey of creating a new wine brand with us. 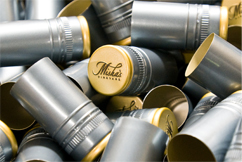 The first round of feedback confirmed the name Misha’s Vineyard worked well for everyone and most importantly, was memorable. However the feedback from our first round of designs wasn’t as positive as we wanted so we decided to work with a specialist wine packaging design company called Tucker Creative in Adelaide. We started with about 15 designs and whittled it down to 3 designs. The brand panel was pretty unanimous with the design they liked. They wanted the label to have a sense of place and the design that was chosen by the panel is the one we now adorns our bottles. Strangely enough it’s probably not the label we would have chosen initially – sometimes you can get too close to something and not see it the way others do – but we are delighted with what they chose. It was so helpful to have such a qualified group of people from around the world giving us their feedback on what worked for them and why.

We have gone back to the brand panel many times now with questions on the names of our sub-brands. Each time their feedback is analysed and it has been an invaluable way of ensuring that our brand reflects the appropriate message around the world.

The inspiration for our label came from a photo that our “visual historian”, Tim Hawkins, took of the vineyard. The Pinot Noir vines shimmer like rows of gold as they stretch down towards the lake against a backdrop of misty blue mountains. That photo was stylized and then used as the background on the label of our Pinot Noir and in a smaller format on the label of our white wines. The design is subtle and elegant – and very tactile because of the printing techniques used. The single vine on the label represents the care and attention that goes into each of our vines so that they can produce ‘gold’ – symbolically 8 bunches of gold foil. The design for our closure is like a gold ‘coin’ has been placed on the top. This commemorates our vineyard ground-breaking ceremony when we placed a gold coin under the first 8 planted vines for luck and prosperity.

Our label was designed by Michaela Hill under the direction of Jody Tucker at Tucker Creative – one of Australia’s leading packaging design agencies. Our initial labels were printed at specialized label printer Collotype in Adelaide but are now printed by Pan Print in New Zealand. Our Stelvin closures are manufactured by Alcan based in Adelaide. Our high quality cartons, are manufactured by Charta Packaging in New Zealand. 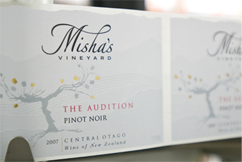 The whole theatrical sub-branding thing started with our test crop of the 2007 Pinot Noir. We wanted to take just a tiny amount of crop from our 3 year old Pinot Noir vines in 2007 to go through the entire wine-making and packaging process in readiness for our first commercial crop in 2008. It was a test run of the entire process, which enabled us to evaluate partners and processes to ensure we ironed out any issues before the much larger volumes of the 2008 harvest. We cropped 1.5 tonnes of Pinot Noir from a small corner of the vineyard which had 3 year old vines. We thought this was an excellent way of letting Olly get a sneak preview of the flavours that the vineyard was producing which would better inform his barrel and winemaking decisions for the following year. Since this was such a tiny amount of wine (100 cases) we thought it would be primarily used for trade and media samples as an early indicator of what our vineyard was capable of producing. So we needed a name for it – a name that said it was just a trial – and a promise of more to come. We came up with “The Audition” – perfect! 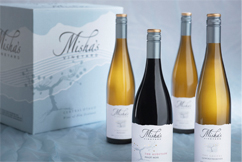 The theatre features very strongly in my life – and theatre is a passion for Andy. I grew up training to be a ballerina from the age of three. But at the last minute (ie 17 years old) a late growth spurt took me inches over the ideal height for a ballerina! When I wasn’t doing ballet, I was at the theatre watching my mother who was an Opera singer, Gloria McDonall, who had been singing professionally since she was seventeen. The earliest memories of my mother performing, was during the first production of The Sound of Music at Melbourne’s Princess Theatre. In fact there are a lot of memories of spending large amounts of time in my mother’s dressing room or watching her from the side of the stage. She was a wonderful woman and larger than life in many ways – everything about my mother was ‘theatrical’. I remember when she remarried when I was about 8 years old, she managed to fit in her wedding between the matinee and the evening performance of the musical Mame – when she was playing the leading role of Mame in both shows! After the ceremony at the church around the corner from the theatre, she had the wedding guests come back to the theatre and watch the show – and then had a party onstage after it finished! 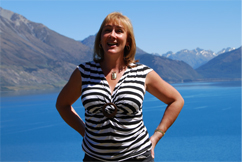 My early professional life was also very linked with the theatre – as a performer for a short period, and then in marketing roles with the Sydney Opera House and the Royal Opera House in London. So it was a natural inclination to use the theatre as the inspiration for the names of our wines. (see also Naming the Wines Video)

Our estate Pinot Noir is called “The High Note” – and that’s our tribute to Gloria.