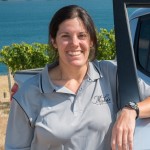 Michelle Dacombe, our Vineyard Manager, has shared her diary notes of how she’s found the 2015/2016 season at Misha’s Vineyard. This will be our 10th harvest so it’s another key milestone. As yet, we haven’t started picking but that will start early in April.

• June-August: It was a very cold dry winter – with some mornings at -5 C

• September: This month was the start of the growing season. We recorded low rainfall and very few frosts – but then frosts are not an issue for our frost-drained site at Misha’s Vineyard

• October: Low rainfall was recorded during the month (9mm), but we had warmer temperatures, good Growing Degree Day (GDD) heat accumulation, and plenty of wind. Budburst was on a par with the 14-15 season.

• November: This month was very dry (10mm rain), with lots of wind dominated by northerlies and we had cooler temperatures causing slow growth of the vines. There was plenty of damage from wind, even with the canopy wires up which normally protect the new growth. There was no sign of flower on the vineyard during this month. We were able to get most of the shoot thinning and bud rubbing completed.

• December: Flowering started in first few days of the month on the lower altitude blocks and was finished across the vineyard by the 16th of the month. The wind continued throughout the month and a southerly change with cooler temperatures kicked in during the week of 14th December and we wondered when summer would arrive. Our fruit set looked good – we had bigger bunches than last year, but fewer bunches. Finally in the week leading up to Christmas, temperatures got very hot and so by the end of the month the vines looked a bit tired and there were a few yellow basal leaves around. However we did enjoy lovely warm weather over the Christmas/New Year holiday period!

• January: Some cold easterly weather arrived and so did small outbreaks of powdery mildew – mainly in our Lakefront Block where we have quite a lot of vigour in some of the bays. With the application of some JMS stylet oil, we were able to contain the problem quickly. We completed all the trimming on the vineyard and we leaf plucked (by hand) the vines on the lakefront, ski slope and house blocks but it only required a very light level of leaf plucking this season. We also removed the laterals around the fruit in other blocks when we did the fruit thin.

• February: Temperatures started off very hot and vines pushed a lot of lateral growth. We also did trimming again across the vineyard. We had 27mm rain on 17th which cooled things down. We had an increased level of wind again – which we normally don’t have at this time of year. During this month we had veraison (which is when the fruit starts to ripen and the berries change colour) – and it was fairly even across most blocks on the vineyard. Our small crew of 6 casuals joining our permanent crew, did a great job of putting the bird nets on the vineyard and completing the fruit thinning. At this stage, our crop level is looking larger than last season – which is a direct reflection of berry number and size. The reality is we don’t have more fruit, but we do have heavier fruit.

• March: We finished putting on the bird nets on the 4th March and completed the last crop adjustments – ie ‘the green thin’! Our casual staff finished with us mid-month as all the work has been completed on the vineyard and now we just wait for ripening and Olly our winemaker to make the first picking decision. We did our first sampling of fruit to check brix levels (ie sugar levels that indicate ripeness) on the 16th March and we were at exactly the same sugar levels as on the 20th March last season – so indicating we’ll likely have a very similar picking schedule to last year. The ripening of the fruit across the vineyard seems to be very even although the warmer nights earlier in the month increased the ripening of the Pinot Gris and Gewurztraminer. On the 17th March, it seemed the autumn mornings had arrived as we had fog and just 3 degrees. We are now just waiting to get the right level of ripeness in the fruit and for Olly to give us the go ahead and the 10th harvest at Misha’s Vineyard will commence!