Work has progressed very well through the vineyard this winter though there were a few disruptions early on due to heavy rain and snow. Lately the temperatures have been mild for the time of year. Things would suggest bud burst this year will be slightly earlier. The willows buds and cherry blossom seem to be 10 days ahead from normal. Though anything can change due to the influence of weather, I would expect the first signs of budburst this year to be around the 16th of September probably starting in the lower reaches of the vineyard and the Gewürztraminer. No signs of sap flow have been seen yet however.

The crew have been looking hard at ways to improve each vine this year. As it is our normal duty to have a quick walk through filling gaps before the barrel pruner goes through the vineyard, we took the opportunity to take a look at the vines while they still had a full dormant canopy. That way it was easier to judge a struggling vine from a strong one before everything was chopped off. Anything that was on the weak side has had its cordon cut back to say 3 spurs (<6 buds a side). This way we should have good balance through the block irrespective of soil type. In parts of one of the more difficult blocks to manage, the Fruit Bowl, we are using a Scott Henry pruning technique similar to a trial done 2 years ago. The system was developed at Henry Estate winery in Oregon and promoted by the infamous Vine Doctor, Dr Richard smart. It provides the opportunity to use additional buds on the cane and split the canopy, growing one up and one down. Two years ago it was partly successful although the top half on permanent cordon kept going strong while the lower tier on cane had less vigour. It has taken some work to replace the permanent structure as the right options then were not available. [caption id="attachment_5544" align="alignleft" width="292"] 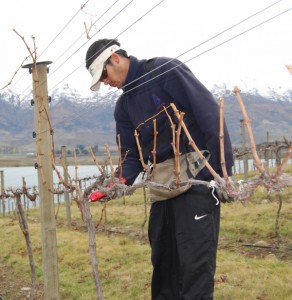 Gabriel joined us this season from Patagonia – Chile. [/caption]The Scott Henry trellis type has a mechanical aspect to it which is helped by the prevailing wind. Though it will take some more time to manage this section, it will provide some important quality to the Gewürztraminer and more importantly help with disease resistance. I have also been through each vigorous section of each block and replaced the permanent cordon where it was possible, laying a new cane to further provide some vine devigoration. It took some extra time to do all this but the work should pay off later. Thankfully a new recruit, Gabriel, from Chile, has joined the vineyard team and is learning the ropes well.

Now that the barrel pruner has been through the vineyard and reduced the canes down to just above fruiting level height, we are making good progress through trimming everything back to 2 bud spurs. I am giving the guys a hard time as usual making sure our spurs are accurately spaced so that we will have the appropriate canopy density by the time spring comes around. Quality work now will pay off later and an open canopy ensures adequate light and air penetration.

Gabriel and I are working through the Sauvignon Blanc cane pruning at the moment. While I am making the main cuts and pulling the waste out, he is trimming up the canes to be laid down. Things are going well though canes are getting quite brittle from the drying of the wind. Work on this will take the next few weeks at least. The Sauvignon is the only variety cane pruned on the vineyard as it takes advantage of the variety’s more fruitful buds up the cane – although this year I have trialled some experimental cane pruned rows on Pinot Noir in the House Block.

The success of the fertiliser program has paid off. Since testing began blocks have shown significant improvements in nutrient balance. Potassium especially has built exceptionally well as has Phosphorus and Sulphur which are very unstable elements in the soil. Trace elements also show dramatic improvements since we started this program 3 years ago. Our biggest shortfall mineral Magnesium, is definitely building although Sodium levels are still a little high probably due to the nature of drainage in part of our soils. This will improve over time. If there are growers out there still following archaic pH protocol then give Superior Minerals a call and get your soil tested by someone that knows what they are doing. Tests are sent to Perry Labs in the USA ensuring consistency and you will find out so much more than a typical local lab test. By fixing the soils base nutrients to the given crop, the pH will generally follow to the desired level which will in turn unlock those important trace elements. We are due to have our shipment of fertiliser arriving soon tailored to each block and will look to apply at the start of September.

The sheep that inhabit the vineyard at the moment are doing a wonderful job chewing the weeds and grass right down and in turn providing manure for a spring flush. Even now since the warm weather and rain we have had the grass is starting to take off. Compost will be made for the first time this year. I am still building up the ingredients for it and plan to put it all together once we have finished our pruning. We have quite a bit of grape marc which has been brought back from winery in skip bins. A large pile of sheep manure from Bendigo Station and some barley straw will also go into the mix making a highly nutritious brew to apply to the vineyard in later seasons.

We’re all looking forward to Spring – which seems close!