Pruning on the vineyard is all but finished. We just have a few touch ups and blocks we are getting just right. It’s been an outstanding winter this year. While we have had plenty of snow low down on the vineyard, it hasn’t stayed around for long. We’ve had plenty of cracker frosts early on in the morning, but as the sun pops up above the mountains, it thaws to be a lovely day. The best thing about this winter is that we have not had the weeks and weeks of fog that we normally get.

This year we are two people down for pruning. Ryan has moved on and Ernst has been away since before harvest so we have been forced to cope with our small team of 3 and do our best under the circumstance. Thankfully our new Felcotronic electronic pruners have performed outstandingly and allowed us to speed up our work while protecting our now ageing joints from the burden of repetative strains which is common with pruning. 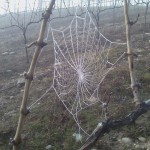 This year we have used a tractor mounted pre-pruning machine to trim off all last seasons growth to a shorter length so that the crew can follow up behind and tidy the spurs to 2 buds. It has been a lot easier to not have to pull these old shoots out by hand. The Sauvignon Blanc which is cane pruned has come up very well. At first I felt there may be a drastic yield reduction in order to get some strength into some of these vines on light soil. This year I have reduced the bud number considerably to force the vines into producing better apical region shoot growth to allow for stronger canes to be laid next year. Also using the disbudding technique to space out the buds on weaker canes accordingly and has come up better than expected and there will still be a sizable crop.

The young House Block has progressed well with the Pinot Noir completed early on and the Riesling just. This was a little more time consuming with additional laydowns and disbudding, and all fruiting wires being strained up to accommodate the vines now permanent form. I am very pleased with the amount of wire fill through here and the strength of the vines going forward. The under vine area has filled out with suitable low growing weed growth that is holding the ground together well preventing soil erosion.

Fertilizer this year is being applied via a tractor mounted spinner rather than a fast but expensive helicopter application this year. Using the tractor takes a lot longer and calibration is tricky, but I am satisfied it is going on well and even. This year we continue to improve on our base elements as well as some vital trace elements.

Both Dress Circle and High Wire blocks are looking great with full wire fill. These blocks struggled as their exposure to the wind can leave them a bit ragged but are now at their full potential. They are finally gaining good strength to cope with the elements. Spur spacing and bud number through here is spot on. The Top Block, being slightly older is at a consistent level and gaining in strength every year. In the Fruit Bowl block I have experimented with some Scott Henry style of pruning in the vigorous middle section of the block whereby 2 additional arms have been laid in order to further increase variability.

We have had 500 sheep in around the vineyard for the last month tidying things up. They have done a great job providing valuable manure for the vines. The next month on the vineyard will be all about maintenance. There are plenty of posts and end assemblies to fix. We also have some work to do on our internal vineyard roads where plenty of January rain has washed things out. Fixing some of the drainage will be on the priority list followed by a nice coating of gravel. Also some planting of Kanauka around Ah Foo’s house.

So lots to do – never a dull moment on the vineyard!