Hi from Rich, My update is a little overdue – just too much to do outside and little time at the desk! 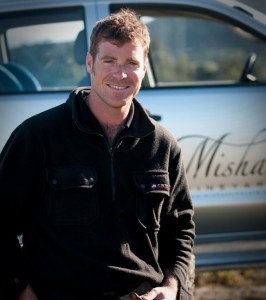 Harvest seemed to go quite smoothly… except for the initial delays in the pickup service, a bee sting and a couple of flat tyres. The crew performed very well and Andy deserves a special mention with some top tractor driving and bucket running! We do miss the amazing smoko breaks provided for the workers and a cup of Sue Lind’s hot soup would go down well now that that temperature has dropped below zero. I was really happy with the quality of the grapes harvested and interesting to taste the flavour differences between clones. Looking forward to the finished product!

Nets are now all off now… finally! It was a long wait for the removal device after harvest but thankfully they stayed well intact and are now stored away ready for next year.

Pruning is well underway across the vineyard. Finishing the Riesling blocks was a tough time, removing excessive tendril growth from the clutches of the trellis system. There is some good wire fill though with the exception of the more exposed parts and lighter soils where there has been a bit of moisture deficiency with some wind damage breaking tips off canes. On the whole there is some very good wire fill for the age of the vines.

We are now working through the new Pinot Noir and it’s a lot nicer pruning with its softer wood which is better on the hands and joints! The windbreak rows have provided just about full wire fill on the new block due to the protection they have provided for the vines in relation to physical damage and lower evapourtranspiration rates. The majority of this block has made it to the fruiting wire and the grow of the plant has dictated whether 1 arm/2 arms are laid – but mainly 2. The replants that were done last year have all come away well and have been pruned back to 2 buds as well as anything that was struggling or had damage to the trunk. I think that this “House” block will create some stunning wine!

We are investigating a trial of some cane pruning and to then compare it to the ability of the permanent spur pruned vines. While there are advantages of carbohydrate reserves in a permanent cordon and a smaller pruning cost associated, there are also advantages in terms of quality from cane pruning. I have previously found cane pruning to show some advance in flowering and can give different flavour profiles than less fruitful buds from spurs. There is also the benefit in buffering wind resistance, as a cane can roll with the wind as opposed to a rigid cordon on which shoots can break off. There would be no use cane pruning if the vines were not in balance as good balance requires a certain number of buds to be laid depending on how healthy the vine is but could simply be spurred instead if not up to it.

The crew has finished off the Pinot Gris in the Dress Circle and have also started pruning some of the other varietals plants situated on this block. There are still gaps in the canopy due to devigourating wind conditions. We’re planning to prune them back hard to give them every opportunity to develop a strong habit next season. I have opted so far to do one pass through with the crew doing lay downs and spur pruning simultaneously and the guys are progressing at a good rate while also doing a quality job.

That’s it for now. I’m off for a week of R & R – the team will continue to work on the pruning in those lovely minus 2 degree days!