After settling into his new home in Bendigo – an abandon hut on the side of Raupo Creek, Ah Foo began to build small dams from rocks in the creek bed to divert the limited flow of water and provide a back fill of water overnight from which to sluice out new dirt and gravel in his hunt for gold particles. The work was hard and tedious, and the rewards slim. Once every two weeks Ah Foo would make the trip into Cromwell (The Junction) to sell his gold – sometimes barely enough to tip the assay scales. The Eastern slopes overlooking the Molyneux River were not lucrative in delivering gold to any miner, but working every day produced enough for his basic needs.

Over the period from September 1873 until December of 1874 Ah Foo continued to live in the small hut he inherited from an un-named European miner who had worked the creek bed but given up and either moved on or returned to his homeland. However the distance he had to travel up the creek to find new sluicing sites grew and the hut was small and not well built. Although he had no experience in construction of stone huts, Ah Foo decided he would move further up the creek to a flat section of land and construct a more substantial building – using a double stone wall method he had seen in some of the European houses in Arrowtown. The site – as well as being on flat land, was closer to stands of Manuka and Kanuka – a vital source of firewood in winter.

He enlisted the help of Sam Watson, his friend who worked the creek down nearer the river, to show him the process of making sand and burnt lime mortar and started construction of his last house. He decided this was to be more than a temporary hut so paced out a space, 10 paces by 20 paces – large by any miners hut dimensions. The walls were marked out from this space in two stacks of the hard Schist rock that was plentiful on the ground with a narrow door in the front facing the Western setting sun, two small window spaces that could be closed off and a good sized fireplace with a quite tall chimney to ensure he had warmth and a cooking fire. The double wall construction was to provide warmth and dryness. Although the Otago climate was typically dry – when the rain and occasional snow did come, the outer walls would absorb the damp leaving the inner wall dry. Construction took time – Ah Foo had to continue to spend most of his time sluicing and panning for gold, and devoted only two days each week to his house construction. The building took until late March to complete. He bought roofing iron from the town using some of his savings and packed straw under hession sheets made from sacks to insulate the roof. At the beginning of April 1874 – just as the first bite of Autumn approached, Ah Foo moved his last possessions from his creek-side hut into his new house. Ah Foo’s house was the most substantial building on the hill and he was very proud of his new residence, and the view it provided.

As the main gold mining declined, the wool industry grew and sheep runs, initially set up in the Wakatipu region, were established further into Central Otago. While most of the sheep were held in the lower reaches of the river flats more sheep runs were developing along the foothills and into the high country. Ah Foo’s house sat in what became Sheep Run 238 – a designated grazing title and during the summer months sheep roamed around the flat that he lived on. Along with the growth of sheep in Central Otago came the rabbit plague. By the summer of 1875 Ah Foo had developed a diet of rabbit, wild herbs and vegetables either grown himself or bought from his friend Ah Lui. Like many Chinese he never developed a liking for the taste of mutton or lamb. So while the opportunity was there for him to have the occasional lamb added to his diet, he never did so and stayed clear of any accusation of stock theft – commonly and rightly aimed at many of the squatters.

Many visitors were welcomed at Ah Foo’s house. He frequently had his friends stay over on the journey between Cromwell and Welshtown, and his cooking was well known to both Chinese and Europeans. Some of the shepherds also became friends of Ah Foo as they moved flocks up to the higher country during the summer months, and back down to the river flats in winter. No immigration officers ever questioned his status. He was known, but did not exist in their records.

Over the years from 1875 Ah Foo’s visits to town became less frequent. He found very little gold now despite working over previously good sites abandon by the European miners who had been there year before. His friend Ah Lui however had more buyers for his vegetables and eels and was considering moving from Bendigo to the Chinese settlement on the outside of Cromwell. The Chinese population was continuing to grow reaching a peak in 1881 – however most of the Chinese were forced to work over the old diggings from the earlier dredging and sluicing as the main companies reduced operations. The larger companies had taken the commercial volumes of gold from the river beds and as yields reduced, the operations became unprofitable. Chinese living in the shanty town at Cromwell worked for less and could still find enough to make a living – but none were returning home to their families richer than they arrived.

In the winter of 1880 Ah Foo’s health started to decline. While only 48 years old, he had been exposed to cold winters and hard working conditions. The arm that he had broken while on his sea journey to Otago had continued to be a source of arthritic pain and his back had become weak from the years of lifting rocks to form dams along his creek for gold panning. As the summer started he found he could not work the long days needed to find fragments of remaining gold in the creek bed or along the shallows of the Molyneux river. His friend Ah Lui called on him every week through the late winter and spring bringing fresh vegetables and on occasions taking his meager gold finding to the assay office in town. Ah Foo found the 5 mile walk from his house to town more arduous each trip and preferred to stay at home where his fire was warm and he had enough food to be comfortable.

During the summer of late 1880 and into 1881 Ah Foo started to spend time in the gully where Ah Lui lived – helping with the vegetable gardens while Ah Lui took his produce to town. It was a warm summer with enough rains to keep the water supply plentiful. Ah Foo was happier working in the gardens than working the creek beds for gold, and he enjoyed the company of Ah Lui and the few remaining Chinese workers on the surrounding hills who came for their supplies. Ah Foo rarely ventured into town throughout the summer. In May of 1881 – when the vegetable patches were mostly fallow for the winter – Ah Foo returned to his house to continue gold panning for the winter. It was not until late June when Ah Lui had not seen Ah Foo for several weeks that he went looking for his friend. He found the house empty and fire cold. Ah Foo’s body was never found. It was presumed that he had either fallen down one of the many abandon mine shafts in the hills above his creek or been swept away in the river while panning at one of his favoured spots down where the creek entered the fast flowing Molyneux river. Ah Lui lived for another 7 years – frequently searching for his friend’s remains so he could give him a proper burial in the Chinese cemetery in Cromwell. When Ah Lui died in the winter of 1888, he was buried in Cromwell.

Between 1863 and 1938 there were 85 deaths of Chinese registered out of a total of 1300 who had been known to die in the gold fields of New Zealand. Most were simply not recorded. 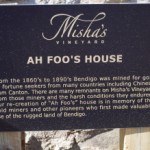 Ah Foo’s house has been re-created on Misha’s Vineyard at the spot where we like to believe he lived. It is just 300 meters to the south of an original stone hut from circa 1850 – 1870 that may have where he first stayed on Bendigo. It has a magnificent view out to the west across the Dunstan lake which now covers the original Molyneux (Clutha) river and sits very near to Raupo Creek. Some of the old mining tools, rabbit traps and remnants of his existence sit on his mantelpiece above the fireplace. Occasionally a coin or other artifact turns up in the surrounding grounds.

We use Ah Foo’s House for tastings of wines, and in winter our workers use it for shelter from the cold winds during work breaks and lunches. There is always a feeling that Ah foo is still overlooking his piece of Central Otago – and maybe still goes occasionally to Raupo Creek to look for more gold. His presence can be felt and the conditions under which he and his fellow gold miners lived is very vivid when sitting in his house looking over the landscape.