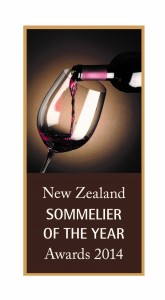 Andy Gladding wins New Zealand Sommelier of the Year and trip to Champagne
Facing a day of blind tastings, theory and practical assessments, including decanting red wine over a candle and opening a bottle of Champagne before the judges, Andy Gladding triumphed over his high-calibre competitors.

The New Zealand Sommelier of the Year Awards, under the direction of Master Sommelier Cameron Douglas and New Zealand School of Food and Wine director, Celia Hay, was held on Monday 15 September.

The competition is part of Auckland’s new W&F Wine and Food celebration held at the New Zealand School of Food and Wine in the Viaduct with 25 leading wineries pouring their wines and international experts presenting masterclasses on cheese, wine, olive oil and honey. The next W&F will be held in September 2015.

Andy was assessed with other finalists on a number of key skills including his knowledge of the world of wine, spirits and other alcohol beverages, including Sake, to his ability to write notes on 6 wines, tasted blind. Andy was also required to open a bottle of Louis Roederer Estate in front of judges, Therese Herzog, Tim Hanni MW and Master Sommelier, Cameron Douglas. Andy then decanted a bottle of red wine over a candle while answering questions from the judges.

Over this broad assessment of sommelier skills, Andy confidently demonstrated that he has a huge depth of knowledge along with outstanding practical ability. His expert customer service skills show a natural empathy with his clients and ability to listen and advise on a beverage choice based on their preferences.
Wins trip to Champagne
The New Zealand School of Food and Wine has sponsored Andy’s flight to Paris and Champagne Louis Roederer will then host him at this family owned estate. Louise Roederer’s New Zealand distributor, Eurovintage will then facilitate Andy’s visit to other French Estates in their portfolio.

Andy Gladding is Beverage Manager at leading Auckland restaurant, The French Café where he has worked since 2011. “Andy is an incredibly passionate, hard working and dedicated member of The French Café and we personally could not think of anyone more deserving,” comments French Café owner, Creghan Molloy-Wright.

Junior Sommelier of the Year
Oliver Carr
Currently working part-time in hospitality, while studying winemaking at Lincoln University, Oliver wins a tour of the Central Otago wine region as guest of Misha’s Vineyard.

Young New Zealand Wine Professional of the Year
Alexis Robin
Orginially from France, Alexis is based in Central Otago. His prize is being part of Herzog Estate’s Harvest Weekend in and vintage at Yealands Wines in Marlborough, April 2015.

About the Wine and Food Celebration
The New Zealand Wine and Food Event is an annual two-day public event in Auckland comprising a showcase of New Zealand and international wine, cooking workshops and master classes. In 2014 these included presentations by US-based Master of Wine Tim Hanni and renowned cheese expert Juliet Harbutt. The event is organised by Celia Hay’s New Zealand School of Food and will run again from September 13, 2015 at their premises in Auckland’s Viaduct .